This is a title.

The Road to "Augustus"

Bread unifies the brand with "BRD."

The new Bread is now available on Android

What the SegWit2x fork means for Bread users

Our next generation Android app is almost here!

How Bread will handle the SegWit2x fork in November

The real reason why banks should worry about Bitcoin

How to spot Ponzi schemes (and why bitcoin is a target)

Early access to the next generation of breadwallet (iOS)

Breadwallet (still) protects you from forks

How breadwallet will handle Bitcoin Cash and bitcoin purchases during the fork.

Keeping your coins in breadwallet protects you from forks

A random walk down Bitcoin Street

What precious metals can teach us about cryptocurrencies

The 5 hottest questions in the bitcoin industry today

Who needs privacy? I've got nothing to hide! (Part 2)

Do you have what it takes to be a bitcoin investor?

Bitcoin: Have your cake and eat it too (Part 1)

Why bitcoin is a powerful tool for the oppressed

How to invest in bitcoin without getting hurt by volatility

The next step in the evolution of breadwallet

What a blockchain fork means for breadwallet, and why exchanges say you should move your money.

Cost of money: a big problem solved by bitcoin

It has been almost 90 days since the BRD token sale, and the team has been very busy. We’d like to take a moment to share with you some of the accomplishments thus far, and let you know what’s in store in the near term. In addition, we’re excited to announce that in April, we’ll deliver tangible benefits to BRD token holders who retain enough tokens to qualify for Tiers 1, 2, or 3. More details are available on the Rewards Waterfall program here.

Here’s a summary of the highlights since the token sale:

Our distributed development team is working around the clock to bring you new features. In order to serve our customers better, we’ve adopted a regular release cycle whereby we will have an update to the app stores on both iOS and Android the first full week of every month.

The next release is targeted for the first week of April, when the app will fully support Ethereum, in addition to bitcoin and bitcoin cash, all decentralized. In April, ERC-20 token functionality will be made available exclusively to our current beta testers who are holding ETH and BRD, a group that is now closed to new applicants. We appreciate our most loyal users and want to enable them first access to these new features.

We know you are waiting patiently for full ERC-20 support, and that it is a highly anticipated feature. We feel the same. Internal testing is underway, and the new version sports a beautiful and intuitive portfolio interface, with detailed currency views for each asset. 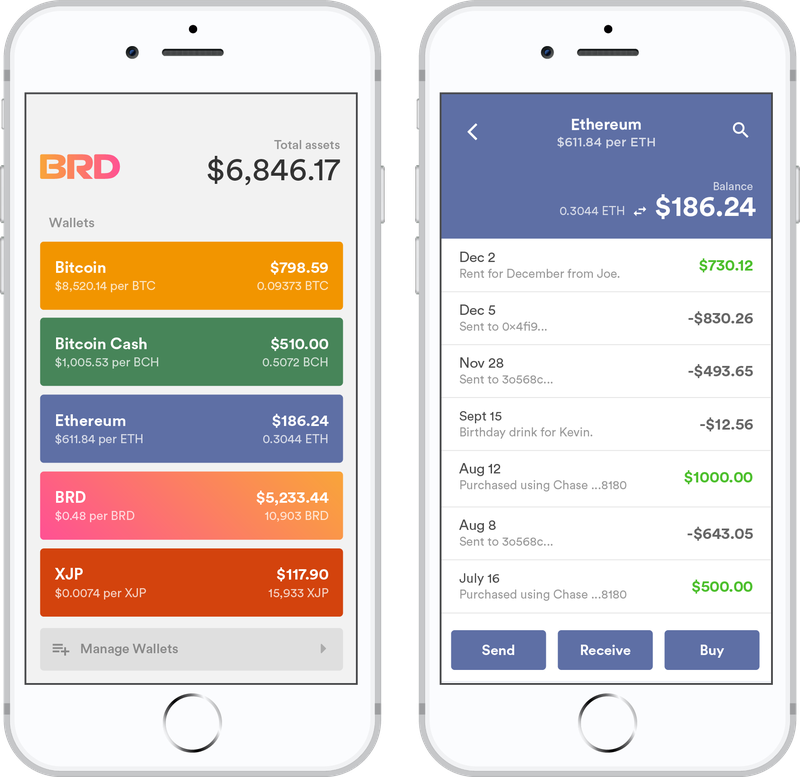 Security and privacy are fundamental tenets of our product. Since over a million users entrust us to help them protect their money, we refuse to take shortcuts and will always put our customers’ security and privacy first. We categorically will not release updates before the code has been thoroughly vetted and battle tested. It is critical that BRD remains a trusted sanctuary for digital assets, particularly amidst daily news of hacking and lost funds.

No cryptocurrency has ever been lost in BRD due to a hack. This distinction is rare in this industry. When you use BRD, you are bulletproofing your finances, but not just from thieves, also from prying eyes. Unlike the vast majority of crypto wallets, we do not run your bitcoin transactions through our servers and have no visibility into your balance or history. If you value your privacy, you should only use a wallet that connects directly to the blockchain, like BRD.

What does it mean to you?

We’re staking our reputation on the ability to deliver real value to our customers through our rewards program, and although the full native implementation is forthcoming, for the month of April, we are pleased to announce that we will begin our Rewards Waterfall program and provide benefits to large holders of BRD tokens. For users in Tiers 1, 2, and 3, corresponding to those who hold 25,000 BRD tokens or more in a single wallet, we will be reimbursing all transaction fees when using our “Buy Bitcoin” features. That’s right: fee-free bitcoin for a whole month! Participation instructions are forthcoming.

But this is only the start. Once the Tiers are fully enabled in the app, other perks will follow, and continue indefinitely as we build the resources to give token holders as many reasons as they need to keep using BRD to manage and store their digital assets.

To celebrate the release of full Ethereum support the first week of April, we will be orchestrating an airdrop. Stay tuned for details!

In the meantime, we would like to thank our loyal users. We have set a long-term and ambitious goal to be the world’s largest decentralized financial institution, and we continue to work hard everyday to make it a reality. In future AMA’s and videos, you will be able to meet members of our executive and development teams. We’d love your feedback, and are here to serve you.

Join in the conversations today: